Category
Use categories to narrow the search scope. This will help you find the right search result even faster. Also, it will lead to advanced detail filters.

With growing concern, we stunned follow the news about the situation in Eastern Europe and realize, that war has come to our close vicinity. Our feelings last from concern and compassion for the Ukrainian people and heartfelt offers of help for the refugees over worry about the people staying in the war zone to anxiety and panic about the consequences for us, living supposedly in safe distance from military action.

None of us can exclude further escalation and the clear threat of use of nuclear weapons in this conflict. May the foresight win in this situation as the attacking party would have to suffer from all the consequences being near to the possible military targets.

On the other hand, the danger of damage or destruction of an atomic power-plant at the war zone is a serious threat. The aftereffects of a reactor out of control near the Eastern borders of Europe are still in vivid remembrance to many of us. The reactor disaster in April 1986 in Chernobyl, now Ukrainian, showed us that there are no borders for radioactivity. Wind and rain spread radiating particles over wide parts of Europe and even in our land people were warned not to go outside. Mushrooms suddenly turned into dangerous food and many years later samples are still examined of radioactive exposure.

How to protect in case of a nuclear catastrophe?

No matter how much we want it, the panacea, the remedy for universal protection of radioactivity does not exist.

The most important measures are for sure avoidance of exposition by staying indoors and closing the windows, following the instructions of the civil protection and the intake of potassium iodide for protection of the thyroid gland for children and younger people. Usually these tablets are provided at schools or nurseries. These so called Iodine tablets inhibit the absorption of radioactive Iodine, which can cause thyroid cancer and usually is set free with reactor accidents.

Caution! Potassium iodide tablets may only be taken among supervision and instruction of authorities and are not suitable for all persons. Adult appx. from the age of 40 may rather harm themselves by taking the tablets. Persons with thyroid issues should consult their practitioner first.

The homeopathic remedy Kalium iodatum (Potassium iodatum) is no substitute for the tablets mentioned above.

However, for persons who don’t belong to groups which profit from Potassium iodide tablets, potentized Potassium iodide Globules, e.g. in D12 could be helpful for protection of the thyroid. Please discuss the matter with your homeopathic practitioner.

For treatments of suddenly occurring dramatic symptoms always keep Aconit (Aconitum napellus) in mind. This remedy is always suitable for the stormy start of symptoms as well as for fear up to fear of death.

Another remedy for cases of fear and despair is Arsenicum album (Acidum arsenicosum). Again, the dramatic symptoms are unquenchable thirst and anxiety up to mortal agony. 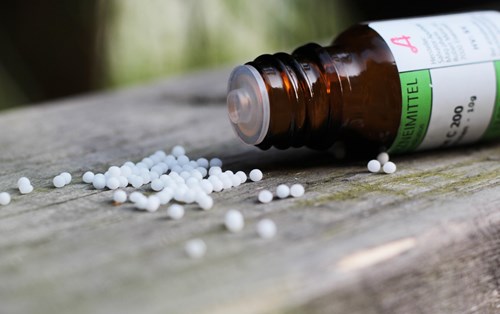 Arnika (Arnica montana) is another proven remedy for consequences of shock.

Besides these well-known remedies for critical situations there are a number of remedies with remedy-pictures that cover the symptoms caused by radioactive radiation. These include Radium bromatum, radioactive remedy, as well as Cadmium-, Caesium-, Ruthenium- or Strontium-Remedies. The choice of the best remedy for you should be left to your homeopathic practitioner.

To give your body the best conditions to detox from all the harmful substances, take care of a balanced diet and whole food nutrition.

Additionally the intake of antioxidants and vitamins for the best function may aid the elimination of toxic matter by liver, bile and kidney as well as some homeopathic remedies.

In this indication remedies like Berberis (Berberis vulgaris), Solidago (Solidago virgaurea), Carduus marianus (Silybum marianum), Taraxacum (Taraxacum officinale) or Equisetum (Equisetum hiemale) may be useful. They can be used in low homeopathic potencies (Globules or Dilutions) or as infuse.